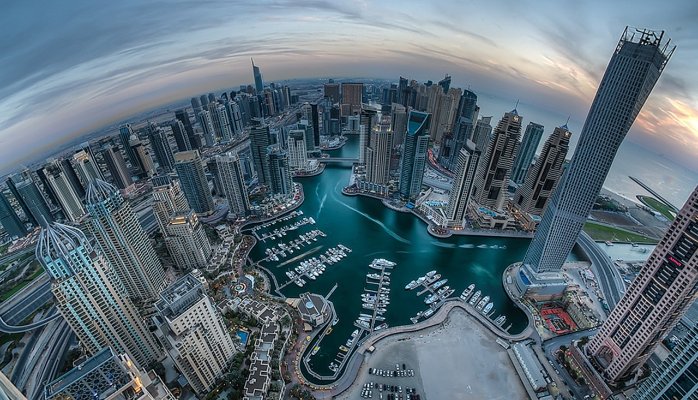 In January 2016, benchmark crude reached a 12 year low with prices falling under $30 a barrel because of oversupply in the market driven by the decision of OPEC to defend market share and not reduce supply.

Decrease in the price of oil has many multiplier effects we will try and examine how a low oil price will impact real estate in Dubai.

Federal government of the United Arab Emirates (UAE) has relied on its oil wealth since the 1970s to fuel growth and development of its country.  Reduction in the price of oil reduces its revenues and therefore its fiscal spending.

In July 2015, UAE removed fuel subsidies enjoyed by its residents, as a measure to cut cost and improve finances.   UAE is expected to post budget deficit first time since 2009 and this was one small step reduce the deficit.

Wholesale and Retail Trade licensed issued in Dubai during 2015 increased by 15.3% while revenues increased by  7.83%, Dubai is the second most important international retail destination globally for 2015, according to CBRE consulting. Dubai is the second most popular destination of retailers present, followed by Shanghai surpassing New York in 2015. Despite the drop in oil prices, Dubai’s retail space pipeline remains healthy with several mega projects already planned or underway.

However public sector continues to be the second largest employer in Dubai with roughly 12.8% of the total labour force. Reduction in public spending might push many of these employees to cut their spending and a recent report in the Wall Street Journal hinted at even job cuts in the public sector.

Another reason is the tourism and hospitality sector in Dubai.  According to a report by MasterCard Dubai airports capacity and frequency of flight destination is the third best in the world only behind London and Paris.

Dubai tops the list with the most number of overnight international visitors:

Similarly, Dubai leads the world in terms of international visitor spending per city resident, estimated at US$4,668 in 2015. It is almost double the second-ranked Barcelona at US$2,793.

According to a report on ArabianBusiness.com, there are more than 16 mega projects in Dubai which are expected to be completed in 2016, these include world’s largest ferris wheel, amusement parks ,opera houses ,themed hotels and safari parks to name a few, this will ensure Dubai retains its status as one of the top tourist destinations in the world and will push real estate investors to buy properties which can be rented out at short term rentals to a growing number of tourists.

Although low oil prices do not seem to have much impact on the overall diversified and non-oil reliant economy of UAE, it will certainly have an impact on real estate prices. As mentioned earlier the numbers of real estate transactions increased by nearly 8% during 2015, however according to an article on Arabian Business prices have decreased by nearly 8%. There are two main reasons for this 1) Buyers 2) Liquidity.

According to data by Dubai Land Department 10% of all real estate transactions were done by UAE nationals, 5% by GCC nationals and another 5% by Russian investors. This is nearly 1/5th of all transactions.

Most of these countries have oil based economies where purchasing power is determined by the economic growth fuelled by rising oil prices, it is safe to assume in the event of budget cuts and fiscal deficits, GCC, Russian and UAE investors would feel holding cash more important especially in the economic instability.  If oil prices were going up or remain above $100 a barrel, investors from UAE, GCC and Russia would be more open to new investment opportunities.

11% of all Dubai real estate transactions were done by Arab nationals in 2014, given the political turmoil in the Middle-East and an on-going war in Yemen, many of these investors may feel more comfortable in parking their capital outside the region, or hold cash given the uncertainty.

In 2014, 14% of real estate buyers in Dubai were UK nationals, in the last 2 years Docklands in East London has witnessed significant real estate investments with very promising returns, there are many other indicators which suggest real estate market in London was growing and this may have forced many UK nationals to invest in their own country than promising overseas opportunities. Political and economic uncertainty may also have reduced their numbers.

Second aspect which may have contributed to price decrease is the liquidity of the local banks.

Government and its institutions contribute large deposits to banks, in the event of low oil prices and rising budget deficits government may be forced to withdraw from these deposits which impact availability of credit and therefore fewer buyers of real estate.

Although oil plays a major role in the availability of credit from banks and many buyers in Dubai real estate are from countries solely dependent on oil, the fact that prices have decreased by 8% in the event of nearly 50% drop in oil prices during 2015, suggest that the impact is not that significant.

Oil is expected to re-bound to anything between $40-$60 by the end of 2016, and once an upward trend is observed real estate prices in Dubai will recover any loss in capital gains during 2015.

Rental market is steady and is expected to remain that way for the foreseeable future, tourism and the labour market by all accounts are growing and this will keep rents relatively stable.

From buyers perspective this is a good time to buy real estate in Dubai, because of lower price and steady yield, oil price once it starts to re-bound will only have a positive impact on the real estate price.

Overall we can conclude that low oil prices have not really hurt real estate market in Dubai because its price is influenced by many other factors, we can say that it is fairly steady with a slight price decrease.