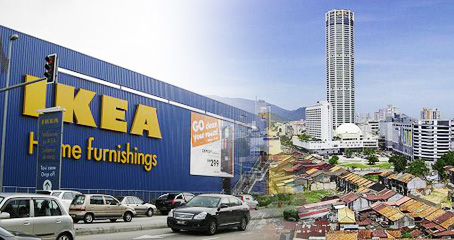 Work at its 24-acre Batu Kawan site has started

GEORGE TOWN: The first IKEA store in the northern region will open in Penang by the third quarter of 2018.

Ikano Pte Ltd, the owner of the IKEA franchise holder in Singapore, Malaysia and Thailand, said work at the Batu Kawan site had started and plans were now underway to prepare a 24-acre plot for the development.

“We confirmed today our plan to open a store in Penang during the third quarter of 2018,” managing director Christian Rojkjaer said in a statement.

Ikano had teamed up with Aspen Group in September 2014 to purchase 245 acres of land from Penang Development Corp to develop the Aspen Vision City (AVC), where the IKEA store would be located.

Ikano will hold a 20% stake in AVC while Aspen the remaining 80%. The planned IKEA store will be wholly owned by Ikano.

“We want to transform the vast swath of land in Batu Kawan into a new metropolis where people can live, work and play. A shopping centre anchored by IKEA is a key component of the development plan for AVC.

“The IKEA vision is to create a better everyday life for the people,” Rojkjaer said.

The IKEA store will bring affordable range of functional home furnishings to the northern region, along with hundreds of job and economic spin-off opportunities for the local community.

The long-term development plan for AVC includes condominiums, office towers, an international school, a Columbia Asia Hospital and a 24-acre park, according to Rojkjaer.

“Piling works are in full swing for the first phase – a gated and guarded commercial precinct called Vervéa. Plans for a high-rise condo called Vertu Resort received a warm response when it was recently introduced to the public.

“With a gross development value of RM8bil, the entire AVC development is slated for completion in 10 years,” he said.

Click here to purchase the ticket worth RM 388 each to the Property Intensive Seminar.

Click here to more details about the Property Millionaire Intensive.