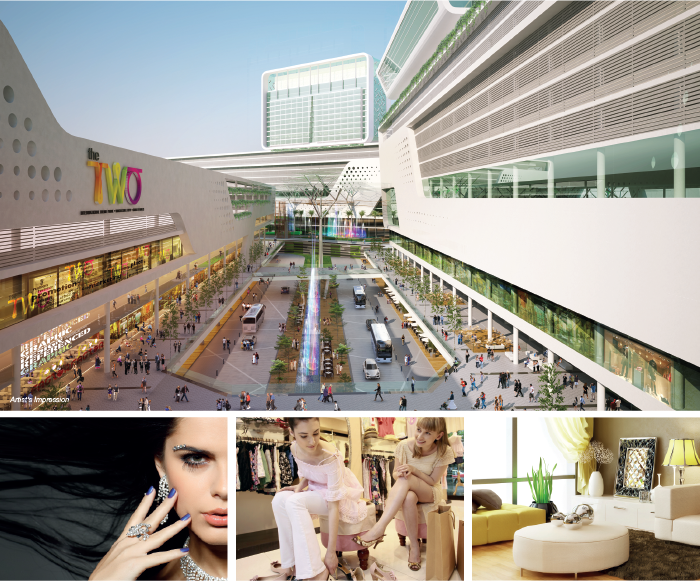 Rawang is poised to become a tourist hub with the completion of The Two – DA Land’s latest lifestyle project that will feature the biggest international indoor theme park in South-east Asia and Malaysia’s biggest mall.

Located within a few kilometres of Kuala Lumpur and Petaling Jaya, the ambitious project is nestled on a 20.4ha site and comprises two phases.

Phase 1A is set to be the heart of the shopping mall with a focus on dining, entertainment and shopping via integrated developments like the outlet mall as well as outdoor and indoor theme parks. Phase 1B, on the other hand, will feature serviced residences, a showroom office and a hotel. Unlike other shopping complexes which are directed primarily to the surrounding neighbourhood area, The Two welcomes non-residents as well as residents with its easy accessibility.

Situated beside the North-South Expressway, the development targets to be the pitstop for international and local tourists travelling along the highway.

Residents of nearby neighbourhoods can also drive up to the nearby Rawang toll, which is just 15 to 20 minutes away from the Damansara toll, the Duta toll and the Bukit Jelutong toll.

Meanwhile, the theme parks are designed by the Sanderson Group, which also worked on various parks such as Warner Brothers’ Movie World on the Gold Coast, Australia; Universal Studios in Sentosa Island, Singapore; and Disneyland in Tokyo, Japan.

At 600,000 sq ft, the indoor theme park is expected to be the biggest in Asia once the project is completed.

The project will be developed in four phases over a period of eight to 10 years. With a gross development value of RM2 billion, the first phase comprises hotels, a mall as well as outdoor and indoor theme parks. Selayang Municipal Council (MPS) Town Planning and Development Department officer Ahmad Faizal Roslan revealed that approval for the project is now at its final stage, given that only a few more documents were required from the developer.

“The main document is an undertaking letter. We in the council are also excited about this project that could transform Rawang.”

“We are in the process of giving the Development Order for this project if all the requirements are met,” he said, adding that the project is expected to benefit MPS in terms of income and Rawang, as a town.