How Brexit Can Affect Malaysians 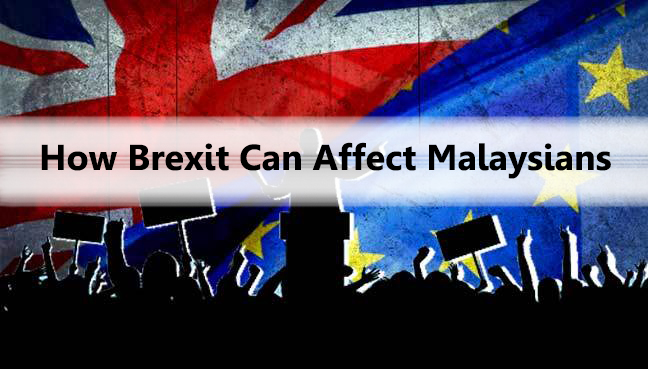 Yup, this topic is quite hot for last few weeks all over the world. Everyone are talking about how Brexit (acronym for Britain Exit) can affect our country, this is definitely a good timing to travel to Britain, the products from Britain must cheaper now, blah! blah! blah! All people are wondering what benefits that they can get from Brexit, especially investors and property investors. So do I, honestly! I also wondering how Brexit can affect Malaysia economy.

Anyway, we still need to keep going to discuss about how Brexit can affect our fellow Malaysians. But first, let us briefly describe the history of UK and EU;

The United Kingdom (UK), officially known as the United Kingdom of Great Britain and Northern Ireland, is a country that was formed by merging four former countries namely England, Wales, Scotland and Northern Ireland. Sometime UK is referred to as Britain in reference to the Isle of Great Britain which forms a big part of UK – consists of England, Wales and Scotland.

Meanwhile, the history of EU traces back to 1951 when six nations started the European Coal and Steel Community (ECSC) to recover from the devastating World War II, through duty-free trade. This alliance continued and ECSC was later changed to the European Economic Community (EEC)in the year 1958.

The community began growing and despite being rejected twice in the year 1963 and 1967 to join the EEC, Britain finally joined this pack in 1973. EEC was renamed again in the year 1993 as the European Union, which has the alliance of 28 member countries (including United Kingdom).

Due to this bloc, the member countries follow a standardized system of laws and policies to ensure free movement of people and intragovernmental decision making – benefitting each other. As time goes by, these allies became strong and started controlling the global economy.

How Brexit Can Affect Malaysians? According to UNESCO, UK was ranked as the second best destination for education out of the top 20 countries in the world. Meanwhile, the colleges and universities in Britain have also been the top favourite choices for Malaysian students to pursue higher education.

The UK’s education sector has been predicted to remain strong regardless of Brexit and its decision to leave the EU is expected to give a positive impact on Malaysian students. The quality of education offered to the students is expected to stay the same and the low currency exchange rate is indeed beneficial to most Malaysians.

But there are several uncertainties regarding the conditional visas for those who preparing to leave for Britain, as well as the law students whom are obligated to take EU Law as one of their core subjects. Currently, Malaysians are among the major investors in the UK, which also includes institutional investors namely the Employees Provident Fund, Retirement Fund Inc. (KWAP) and Armed Forces Fund Board (LTAT).

In regards to this, Cornerstone International Properties director Virata Thaivasigamony stated that in the year 2015, 73% of Malaysian investors invested in purpose-built student accommodation (PBSA) oversea.

Brexit posts both good and bad news for many. Even though the low currency exchange rate and the lower house prices widens the investment opportunities for Malaysians, yet the situation is not favourable for the existing property owners.

The possibilities for recession is still high, which might cause difficulties in terms of property rental or sale. There are several property developers in Malaysia who have major ongoing projects or upcoming developments based in the UK. The British’s decision has created several concerns among the developers as the uncertainty about the UK’s economy created by Brexit could reduce the demand for UK properties from both Britons and foreign investors.

Besides that, the weakening Pound will also reduce the earnings and the value of the developer’s project in terms of Ringgit.

Some of the developers have decided to proceed with their project as they believe the UK will still remain as a key investment destination and financial centre in the long term. Meanwhile, some are adopting the wait and see approach. In the year 2015, almost 400,000 tourists from the UK visited Malaysia and the number was increased by 2.4% in the first quarter of 2016. Yet, the number is expected toreduce further as the uncertain economy and currency will deter most British citizens from travelling abroad.

However, this poses a minimal impact on our tourism sector. The majority of tourists visiting Malaysia are from Southeast Asia and Northeast Asia regions.

As for Malaysians who wish to visit the UK, this is the best time to do so since the declining Pound will give a better currency exchange rate.

Brexit gives less impact to Malaysia in terms of trade as the UK only contributes 1.1% out of Malaysia’s total trades. There are two possibilities of Brexit at the moment: Firstly, UK can be seen as a less attractive trade destination due to its current unstable economy; and secondly, the low currency exchange rate might encourage trade as UK products will be much cheaper compared to before.

Besides that, Malaysia has been a popular destination for foreigners to settle down due to its My Second Home (MM2H) programme. There are many British expats in Malaysia who receives British state pensions. Brexit will affect them since they will be receiving a lower pension due to the low currency exchange rate.

From the above 5 key factors, we get to know that there is not much impact in Malaysia and seems like we still can get some benefits from Brexit. In addition, there is no doubt that this is the great chance to invest in Britain property. Besides, I think that the exchange rate between British Pound and Ringgit Malaysia is still high for me which is 1 British Pound = 5.30 Ringgit Malaysia as of 13/7/16 which according to google converter.